FHJDSHJDGSHHDGF
The Gardens of Antwerp
by Owner of Green

This is the city of Antwerp, circa 1572. It was one of the most cosmopolitan, creative, commercial cities of the 16th century, and home of some of the era's most impressive engravers and printers. 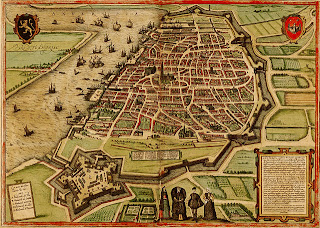 I found this particular map in a charming book called Imagined Corners: exploring the world's first atlas. It offers a treatment of the political, social, economic, religious, intellectual and cultural trends that gave rise to this new format – a unified, portable, bound collection of maps of the entire known world. This "atlas" (the term would not be coined til a few years later by Mercator) was called Theatrum Orbis Terrarum (Theater of the Countries of the World), created by Abraham Ortel, and it was a runaway best-seller.

(Yes, now you know, I am one of those folks who loves maps, especially old maps, and can spend hours looking at them and reading about them. A wonderful thing to do over yomtov, the holidays! One of my pet peeves is that most of our mental maps today are of political boundaries – cities, states, nations – and streets. That is because they are based on our road maps. We use maps mostly for traveling than staying, for getting from here to there rather than recording and mapping what is here. Try to find a stream or watercourse on most common maps, never mind the stream's name, and you will be sorely frustrated. Yet, we need to know the course of our rivers just as we know the turns on our streets. How different it was when land claims were marked in legal documents by, literally, "landmarks," the markings of the earth itself: the old sycamore tree or the rock with the split in it or the north bank of the local creek. How wonderful it would be to carry those maps around in our minds once more.)

But what I found most riveting about this map (at least given my present pre-occupation with urban orchards) is the way their houses were laid out. And what happened with the space in between. You can see this better on the full resolution map found here. (Click on the map to enlarge it even more.)

Throughout Antwerp, houses ringed the edges of city blocks, with open spaces occupying the land inside. Farms, orchards, (vineyards?) and perhaps even playing fields were nestled between the homes, creating a common place of food production, family gardens, as well as pastoral refuges in the middle of the city.

Commercial farms existed on either side of the city (beyond the moat on the north, east and south and along the river on the west). But the pocket farms were urban gardens, tended no doubt for the self-same reasons we tend community gardens today.

We can learn from this model. As we begin to re-imagine the design of our cities, as we begin redraw the lines between nature and home, green and built infrastructure, Antwerp of old offers us a wonderful alternative. We can build fields among buildings, farms alongside businesses, gardens nestled amid the courtyards of condos.

Owner of Green
This user was automatically created in order to be a manager user for the map initiative "Green"
0
Be the first to comment on this post.