Earth Etude for Elul 17 – Do Not Be Daunted

Last week, my brother said to me, “Why do you spend so much time working for the environment and trying to change the world? It is hopeless.” He then cited an activist friend who, for decades, has been researching and trying to uncover the full story behind the assassination of President John F. Kennedy. Despite a History Channel episode on this issue that he helped bring about, he has virtually gotten nowhere. This is also the case with much of his lifelong work to expose injustice, fight prejudice, and achieve equality for all people. “Jay,” he said to my brother, “I'm afraid all we can do is take care of ourselves and our own. I would advise that you follow that path.” 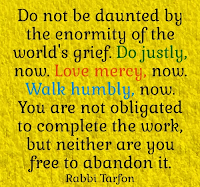 I had a ready answer for my brother: Rabbi Tarfon's dictum in Pirkei Avot, Ethics of The Fathers (2:16), which is one of the 63 short books that make up the Mishna, but the only one that does not deal with laws, but rather, moral insights: “It is not your responsibility to finish the work [of perfecting the world], but you are not free to desist from it either.” 'Nuff said. And my brother agreed.

I believe that Rabbi Tarfon's advice is so profound that indeed, he stated what most of us already intrinsically know. Still, it never hurts to hear it, especially at this time of soul-searching and new beginnings. It reaffirms what for many of us is a long struggle that, despite its frustrations, is still one we would never abandon.

In June, President Barack Obama exemplified this way of thinking when after years of fruitless efforts to pass climate change legislation, he actually stepped aside from the lawmaking body ofAmerica and took direct action on his own. And he did it forcefully, bypassing Congress with conviction and determination, with little regard as to how his words would be taken. “There is no time for meetings of the Flat Earth Society,” he pronounced. After laying out the price in lost lives and great governmental expense already affecting the world's population, which he said will only become higher, he invited us to work along with him. "If you agree with me, I'll need you to act," he said. "Remind everyone who represents you, at every level of government, that there is no contradiction between a sound environment and a strong economy – and that sheltering future generations against the ravages of climate change is a prerequisite for your vote."

Obama then laid out new regulations on heat-trapping carbon dioxide that is released by new and existing power plants, as he described impending efforts to increase renewable energy production. These include raising efficiency levels on appliances and machinery and instituting protective measures for communities facing higher temperatures and rising waters.

And the striking part was that none of his plan's components require congressional approval.

Naysayers, even from within his own party, have complained and even threatened legal action, saying that his proposals will kill jobs, destroy the coal industry, and create other impediments to our usual, carefree way of life.

But Obama made his weekly radio and internet address and launched his campaign on his own because he knew it was the right thing to do, and indeed, the necessary thing to do. His was an ethical action that outweighed any risks.

Rabbi Tarfon would be nodding in understanding.

Susie Davidson, a local journalist, author, poet and filmmaker, is the coordinator of the Boston chapter of the Coalition on the Environment and Jewish Life (COEJL). She writes for the Jewish Advocate, JNS.org, the Jewish Journal, the Jewish Daily Forward, and other media, and has contributed to the Jerusalem Post, the Boston Sunday Globe, and the Boston Herald. She coordinated the OccuPoetry series at Occupy Boston. She is also an active board member of the Jewish Alliance for Law and Social Action (JALSA) and the Alliance for a Healthy Tomorrow (AHT).