Cross posted in Environmental Tip of the Week 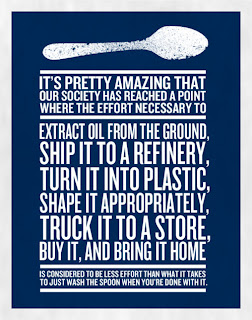 So what happens to plastic utensils when you're done with them and you throw them out? "According to the Clean Air Council, enough paper and plastic utensils are thrown away every year to circle the equator 300 times. It is estimated that close to 40 billion individual plastic utensils—meaning 14 and 18 billion plastic spoons—are produced each year, and with such low rates of reuse and recycling, most of them end up in our landfills, beaches and oceans. They are likely to remain there for hundreds of thousands of years." ("Ending Take Out Waste")

Washing your spoon when you're done with it takes two seconds! Being out and about, going to work, etc. is no excuse: My husband takes one of our regular forks to work in his lunch bag every day. He brings it back home in his lunch bag and I stick it in the dishwasher. That's it. To me it sounds like that's less effort than if he had to find a garbage can.

What really gets me is when a plastic utensil gets thrown out without having been used because it fell on the floor.

If you must use disposable, such as a large dinner party where it would be impossible to wash that many utensils, there are eco-friendly options. Check out these, for example.

No Replies to "Environmental Tip of the Week: Try to avoid disposable eating utensils!"